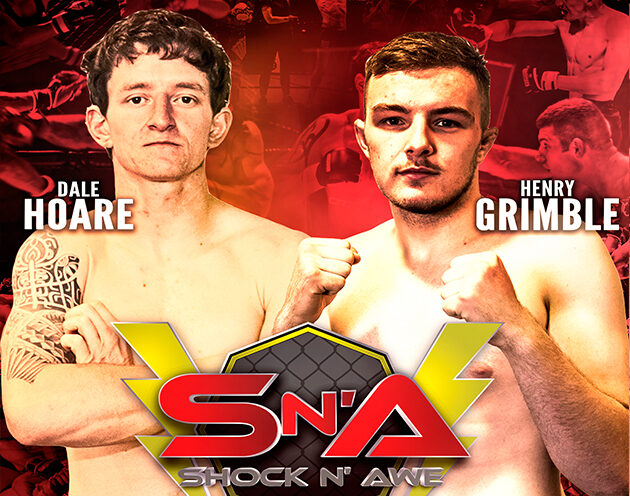 Two local lightweights are set to clash for the vacant amateur belt on October 19th when Henry Grimble takes on Dale Hoare in a mouth-watering clash.

Henry Grimble is a mercurial talent. With slick striking and a solid Jiu Jitsu game, he hasn’t got a record to reflect his skill set, yet. Henry has only fought the very best in his career so far, often at Middleweight and Welterweight which meant he was the smaller man.

Although he always put on a classy performance, it was often him being bullied by the bigger man that saw him on the losing side. This next fight is at his natural weight class and both Henry and his team believe this will be the catalyst to big things for the Guildford man.

Standing in his way will be Dale “The Dirty” Hoare who will be looking to extend his unblemished amateur record to six straight wins. Dales grinding style is what seems to be the one thing his opponents can’t keep up with as we witnessed at Shock N Awe 29.

Can Henry match Dale’s pace and use his slick striking to derail Dale? Or will the Gym 01 prospect break yet another opponent as well as take home the belt?

VIP Cageside Table £750 SOLD OUT – Seating up to 10 people, with a buffet served during the interval and your own VIP bar it is no wonder these tables are the first to sell out. As it stands, there is only one remaining so be quick if you want the best view in the house.