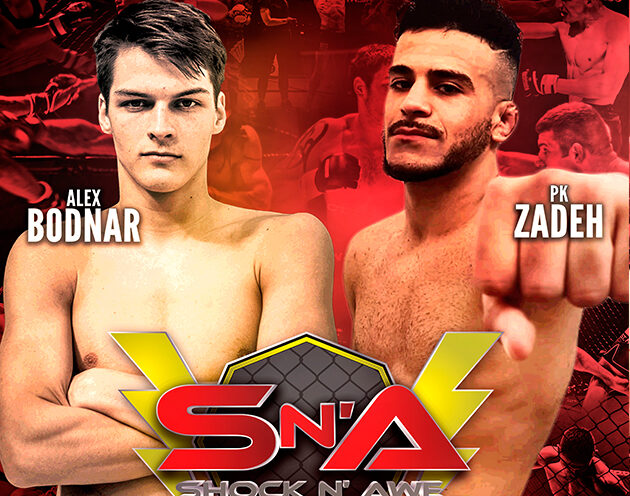 The amateur level of mixed martial arts at Shock n Awe has always been very high, due to there being so many good gyms along the South coast. Any fighter who manages to make it to the top of the tree and secure one of the Shock N Awe titles is likely to be able to move into the professional ranks given time.

Alex Bodnar is one of them, with his only loss as an amateur to the former champion, Alex Box. Fast forward two years and Bodnar has not just transitioned to the professional ranks, he has smashed his way into them.

His two victories since turning pro have both been performance of the night contenders, in particular his recent victory over Maxime Giacalone snapped the Frenchman’s five fight win streak via rear naked choke in the second round.

Now Alex faces PK Zadeh, who will be making his professional debut in what is surely going to be another titanic battle. PK has had a staggering 10 amateur MMA fights, with 8 of those being wins.

He has held multiple titles around the UK so will be looking to silence the partisan home crowd and show he is going places. With seven years experienced notched up he will also have a considerable advantage in experience when the cage door closes.

With a slick boxing style and dangerous Jiu Jitsu, PK is a real threat to any fighter so it’s going to be interesting to see which of these athletes can impose their game plans and take home the win.