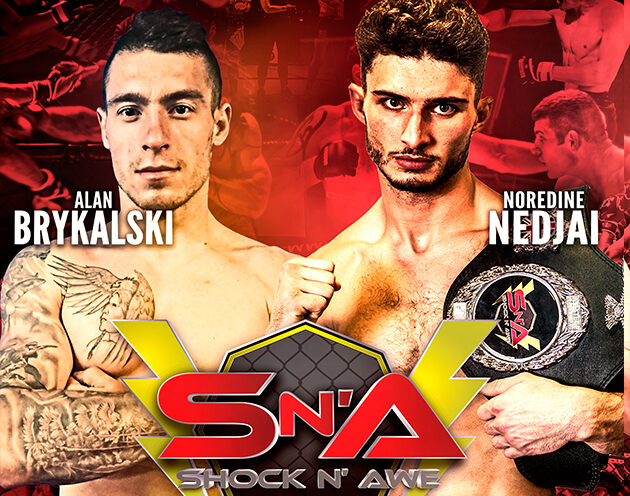 Back in November 2017, the dust was settling on Shock n Awe 26 and a new amateur featherweight champion had been crowned in what was a thrilling performance from unbeaten prospect Noredine Nedjai.

His blend of athleticism and slick grappling saw his take home the belt and it seemed the world was at his feet.

But as with many young people who are on the verge of being “the next big thing”, they end up attracting the wrong types of people and then things go wrong. Almost two years later and finally Noredine has got his life moving once again in the right direction. He is back in the gym, settled in his home life and looking forward to getting on with what he does best.

His team at Gym 01 believe he could go to the very top and the first step on the ladder comes on October 19th when he faces his toughest challenge to date.

Alan Brykalski is a man mountain who will not be coming to Portsmouth to make up the numbers. Moving down from Welterweight will likely see him with a size advantage when he squares off against Nedjai who is coming up from featherweight for this lightweight fight.

Training under the watchful eye of Dave Matthews at the Lion Den, he has training partners such as Shock N Awe & UFC veteran Craig White to help him prepare so there should be no doubts Alan will be ready to make the trip along the south coast.

Can Brykalski silence the SnA crowd or will Nedjai make it a successful professional debut?