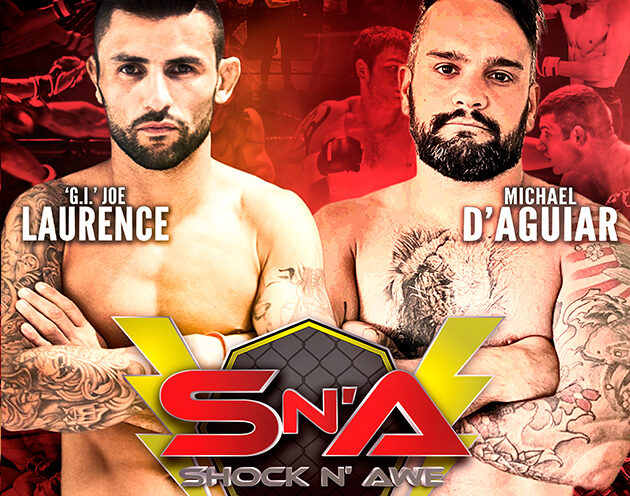 We are excited to announce two Shock n Awe veterans who are returning on October 19th. Between them have amassed a massive seventeen appearances on the promotion with one of them appearing on Shock N Awe 2, these guys are no stranger to the cage.

Mike “The Portuguese Pop Star” D’Aguiar takes on “G.I.” Joe Laurence in a catchweight 60kg bout, in what is to be the final walk to the cage for both fighters.

Joe Laurence won his first Shock N Awe bout way back in 2009 against Owen Gayle so it’s only fitting he returns to the cage on the 10th year anniversary for his final fight.

It was Joe’s busy boxing style that won him so many fans. Regardless of the result he was always in exciting fights, so matching him up with a grappler just felt like another cool twist.

Mike D’Aguiar is the former amateur flyweight champion who has a kill or be killed style of grappling. It’s no secret he loves to attack leg locks and that is where his strengths lie, but first he has to get it to the mat.

Can Joe keep the fight standing and use his fast hands to his advantage or will Mike be able to jump on a submission and take away the win?

This fight is going to be special. Two great fighters who are friends outside of the cage, putting it all on the line for one last time.

We certainly can’t wait to see it.