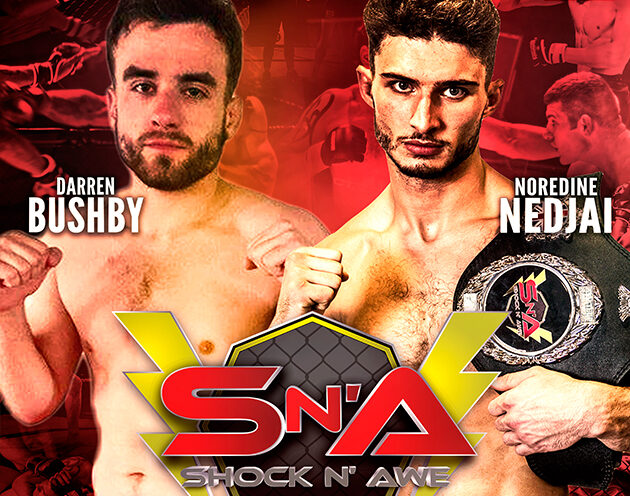 The final professional fight for Shock n Awe 30’s fight card is here and it is something special.

Set to face off against each other are two former amateur champions making their professional debuts for the South coast MMA fans. Both of these fighters are yet to taste defeat inside our cage but on October 19th that is set to change.

Darren Bushby holds two straight victories at Shock N Awe and will be looking to make it three in a row when he makes his professional debut. Darren’s sharp striking and non-stop pressure has seen him stay unbeaten when inside the South coast’s toughest proving ground, but it’s the improvements to his grappling that has seen him add a sneaky submission game.

Working with Jiu Jitsu black belt Jack Magee, Darren has turned into a real threat wherever the fight takes place, so he will be confident his size advantage and added skills will be too much for his opponent.

However, across the cage will be a hungry fighter, not willing to go down easy, because Noredine Nedjai is a man on a mission.

After a rough 18 months that saw him lose focus and disappear from MMA, he is back and training as hard as ever at Gym 01. Unbeaten at amateur, Noredine racked up five impressive wins and now believes he has the motivation to take a real run at the featherweight division over the next two years. First up though, he was offered the chance to face another former champion, and he simply couldn’t say “no”.

Can Noredine show he is the real deal or will Darren be the one who is all smiles?

Side Circle Unreserved Seating £40 – Take a seat on the side circle which is a huge balcony over looking the cage and fighter entrance. SOLD OUT