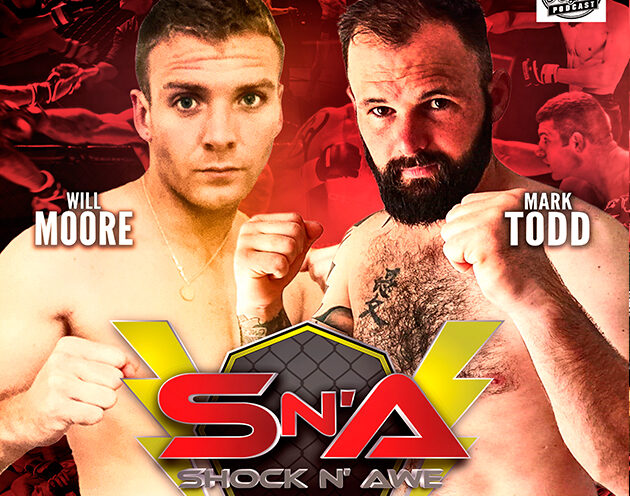 Back in December 2017 there was a Contenders card that had four K1 fights confirmed at 84kg on it. Will Moore was one of them and his opponent pulled out the day before the event. With one other 84kg bout still to go ahead he was on standby and low and behold one of the 84kg fighters failed to turn up. With 2 hours notice Will was at the venue, without a coach, ready for his debut against a complete unknown opponent.

Fast forward 18 months and Will has now joined the stable at Thaiworks gym who regularly feature at Shock N Awe Contenders events. With coaches Mark Eastwood and Dave Wright by his side we are certain to see a new level of fighter.

Finding Will a reliable opponent from a reputable gym proved harder than it should be. When we spoke to head coach at Flo Martial Arts, Steve Hollister, he had the perfect match in Mark Todd. Mark who hasn’t competed since March 2016 has been hungry to return to competition. With two fights under his belt in MMA, this will be his Kickboxing debut.

These two at Middleweight is a scary sight, both of these fighters easily look like light heavyweights and coming from such reputable gyms means the fans are going to be in for a real treat.

Side Circle Unreserved Seating £40 – Take a seat on the side circle which is a huge balcony over looking the cage and fighter entrance. LESS THAN 10 TICKETS LEFT.

VIP Cageside Unreserved Seating £75- The front row just a few feet away from the action. With a VIP bar located on the stage amongst the VIP seats and just four VIP tables, these premium seats really are worth the money. 2 TICKETS LEFT.