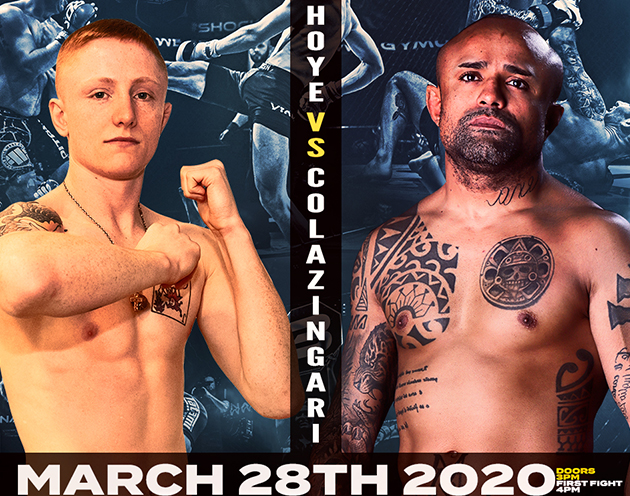 There seems no better way of finishing our most successful year off than by releasing the main event for Shock n Awe 31.

After the huge success of our last visit to Portsmouth’s historic Guildhall, the list of names wanting to fight on our maiden 2020 event was extensive and this has made picking some top fights very easy to do.

The first to be released is none other than local fan favourite Elliott “Toy Boy” Hoye making the first defence of the title he picked up at Shock N Awe 30. He will be taking on Italy’s number two ranked flyweight and Brazilain Jiu-Jitsu black belt Adriano Colazingari.

Training under Fabio Ciolli, one of Italy’s most experienced coaches, there is no doubt Adriano will be coming over to silence the home fans and pick up the biggest win of his career so far. Adrianos dangerous ground game has seen him finish multiple opponents (including two by triangle choke) which makes this fight very interesting.

In all of Elliott Hoye’s eight professional fights, he has been able to take every one of his opponents down to the canvass. His last performance saw him take out twenty fight veteran Shamsul Haque via rear-naked choke, after taking the fight to the mat numerous times.

Can the champion do the same and avoid the submissions on route to his first title defence or will Adriano take home the belt and leave the home town fans stunned?