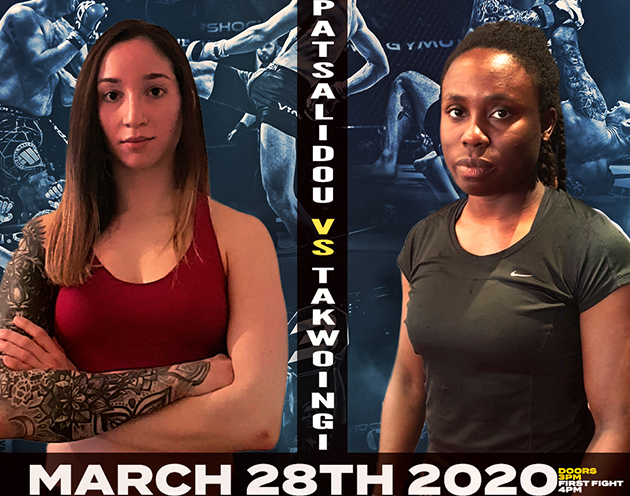 Back in 2013, there was a fighter based in Bournemouth fighting out of Ippon gym who made their MMA debut at Shock n Awe. This young athlete cut her teeth five times in the Shock n Awe cage winning all of her fights (both at amateur and pro) before capturing the professional flyweight belt.

Now one of the UK’s fastest rising stars in the UFC, Molly “Meatball” McCann has shown that with hard work and discipline dreams can really happen.

Seven years on, Ippon has another unbeaten flyweight who has already notched up one impressive victory on the South’s top MMA event. Moti Takowingi showed her fantastic striking ability on the way to a hard-fought victory last time out. Moti will be hoping to continue her unbeaten start when she faces unbeaten Cypriot Aphrodite Patsalidou, now training out of Gym 01 in Portsmouth.

Aphrodite recently made a successful MMA debut, beating a more experienced opponent by judges’ decision. Can Moti keep Ippon’s winning streak going or will Aphrodite make her home debut one the stuff dreams are made of?

VIP Cageside Unreserved Seating £75 – SOLD OUT The front row just a few feet away from the action. With a VIP bar located on the stage amongst the VIP seats and just four VIP tables, these premium seats really are worth the money.